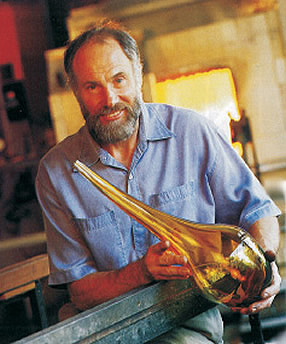 Guido van Besouw entered the art world when the opportunity arose in 1977 aged 26 to serve as an apprentice under Anton Voorveld an established stained glass artist at the time.

In 1980 Guido launched his career as a full time glass artist, by creating a set of windows and skylights for the Royal Hotel Grill Room in Durban. For the next ten years he produced many windows for churches and private residents around South Africa. In 1984 Guido was invited to a group glass art exhibition at the NSA gallery where he saw blown glass by Shirley Cloete, David Reade and Barry Thompson, and was fascinated by the potential of this creative medium.

Ten years later in 1994 he started in earnest to research the possibility of blowing glass and exploring the potential of making his own glass for stained glass windows. By 1996 he had built a furnace acquired kilns and most of the tools needed to blow glass. Early in 1997 Guido started making glass, teaching himself and developing his skills along the way.

Recognized as one of the leading glass blowers in South Africa

Today, Guido van Besouw is recognized as one of the leading glass blowers in South Africa and has mastered the art of hand blown glass. He was awarded the 2003 SA Elle Deco International Design Award for tabletop glass. His work is regular featured in exhibitions and magazines, Guido has been working with glass for thirty five years and understands the medium and its potential, and has a unique ability to balance and match colour. He draws his inspiration from nature and his years of experience in creating stained glass windows.